The G20 summit is being held in downtown Toronto this weekend.  Today, there was a “peaceful demonstration” planned.  Approximately 4,000 people would meet at Queen’s Park, walk down University to Queen Street, then head West on Queen to Spadina, and then back up Spadina to Queen’s Park.

You can view all 150 of my pictures from today on Flickr. 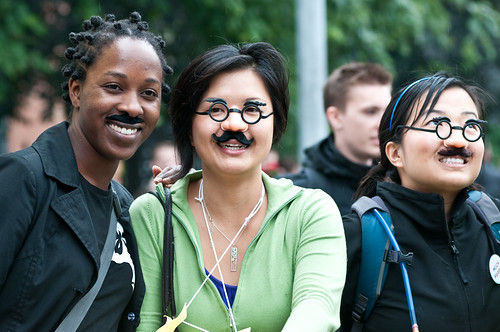 It started out peaceful enough… 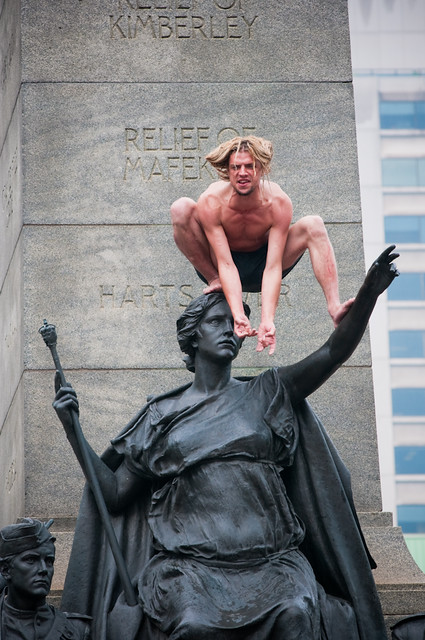 … with a few crazies. 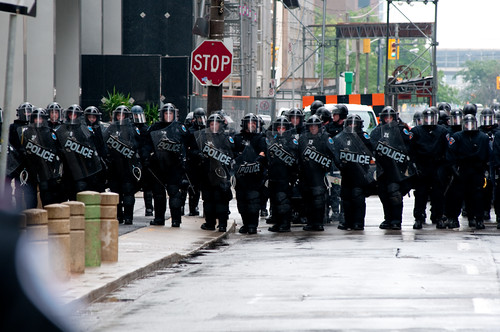 Police lined up on Richmond to prevent people from heading South towards the security perimeter. 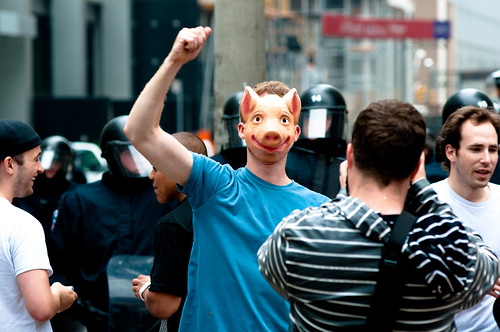 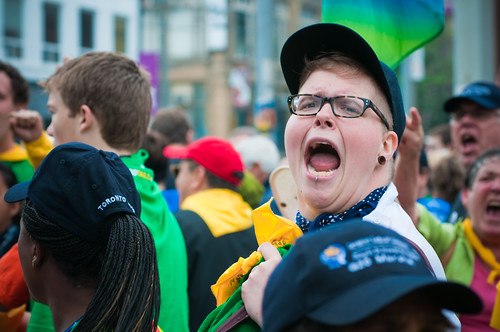 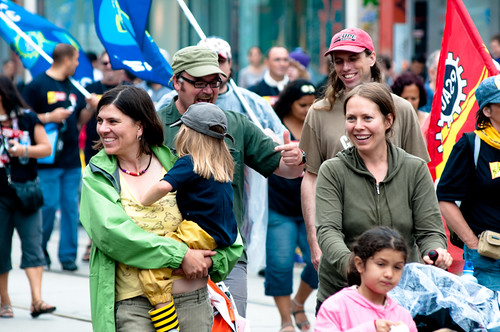 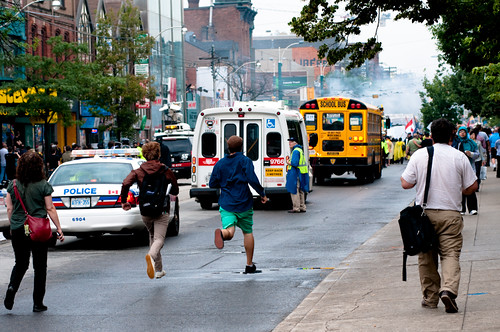 Something happened at Queen & Spadina that I did not see. People started running around yelling “TEAR GAS!” but I read online that it was smoke from a flare. After that, it got a little bit crazy. The protesters began heading back East along Queen Street instead of going up Spadina. Sometime in those 5 minutes, someone(s) smashed all of the windows of 2 police cars. 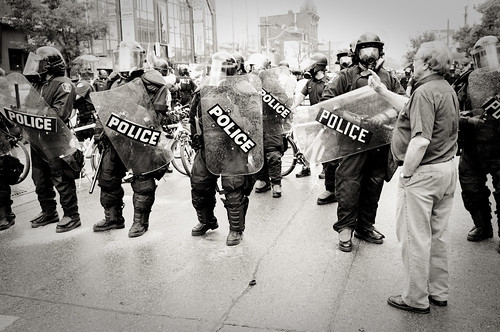 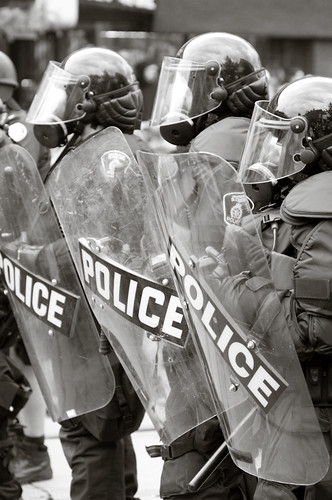 Police officers came and blocked the area that contained the two police cars. They all put on gas masks. Shortly after this, I headed home, since I live in the same block. 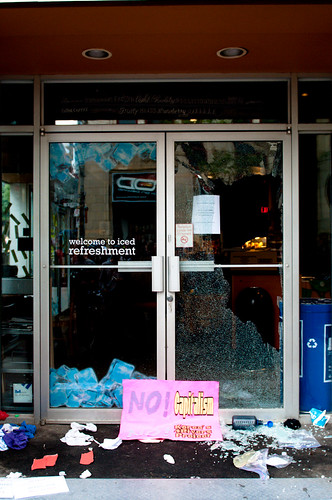 When I got home, I saw on CP24 that Starbucks at Queen & John had been smashed, so I went back outside. 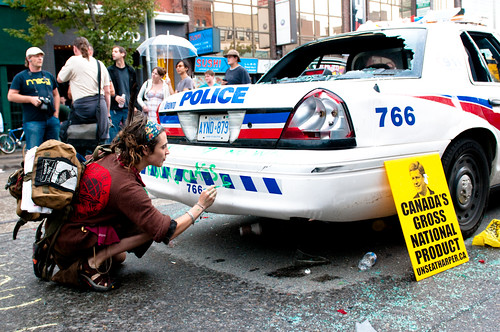 The police officers had left the area, and I saw that people had painted the vandalized police cars. 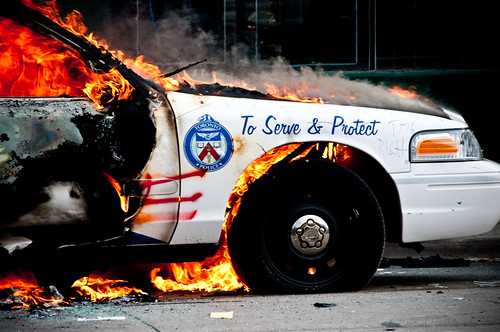 I went back home and started transferring pictures. A few minutes later, my boyfriend asked “did you hear that?!” We looked out the window and there was black smoke coming up from Queen Street. I grabbed my camera and went back outside. Someone had lit the police car on fire. 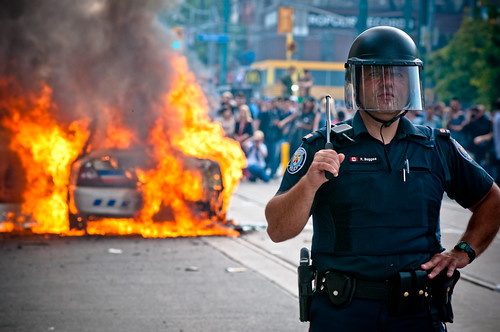 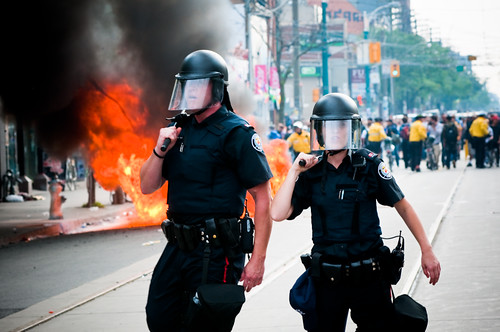 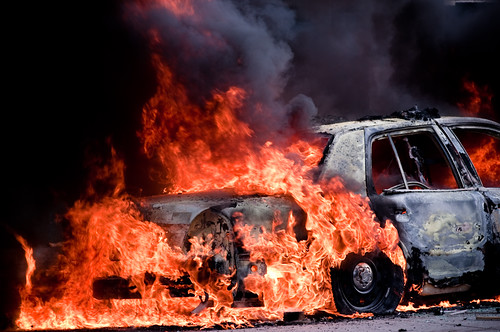 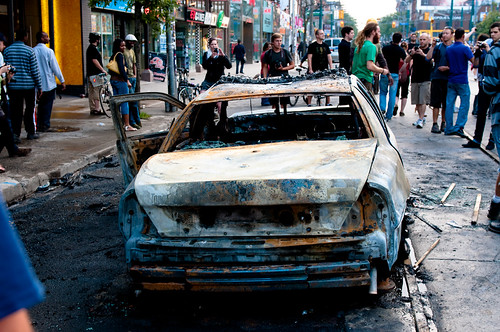 It was surreal seeing people walk all over the street. Shortly after this, I saw a few people set the other police car on fire. 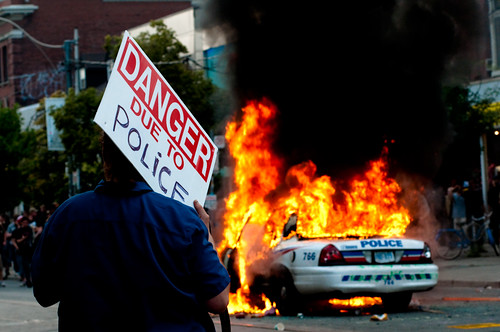 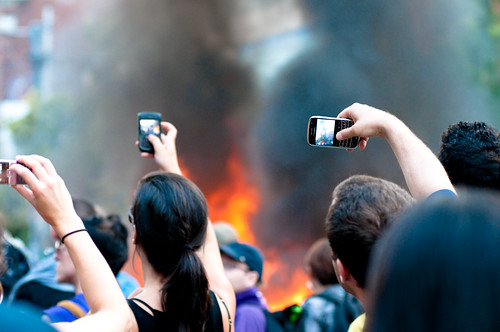 I watched from my balcony as cops were rushing protesters to push them North.  Just around the corner, protesters were becoming increasingly violent.  The whole thing was pretty scary and surreal.

Check out my Flickr set for more pictures from the G20 protests today.

We live in a such a sad society but the worst thing is that Politicions never seem to listen-people are hurting-loss of jobs,cost of living goiung up each year-when will this ever change?Vilence is not the answer.The Government is always the main one-who cause for thises things to happen-They need to wake up-start thing thinking more wisely-thay buse their positions to get 3what they want and no one else.They should be ashamed of themselves-including Rob Ford-Mayor of Toronto and all over.

They take everybody and life for granted.We all have a right to have life.