The Last New Year (IMDB) (official site) is playing at The Royal in Toronto for its last night tonight at 7pm.  I went to see it last night, and it was fantastic.

Since I only started doing film stills in 2008, most of the things I’ve worked on still haven’t been released.  It was very exciting to see something I worked on on the big screen!

They will also be doing screenings in Victoria and Vancouver and I highly recommend seeing it.  It’s a great film that has come a long way since I saw one of the early rough cuts last year.

The Insignificance of Harvey Recap, Part 2

On day 9, the snow was up to our knees.  Where was all this snow when it was needed for the luge?

On day 10, we went into Blue Mountain village, which was really nice (and a lot warmer!).  We had a restaurant scene, a scene at the Bark & Fitz pet store, and then miscellaneous shots around the village.

The next two days were spent on “The Art Farm” in Duntroon, ON, a beautiful farm owned by an arist and a producer.  On the first day, we had a trained raccoon – apparently the only trained raccoon in Ontario.

We didn’t see many of the farm animals, but the llama did come over to say hi to our locations manager.

And that brings me to my last day on set.  Day 13, the big strip club scene.  Again, this was a closed set so I wasn’t allowed inside for most of the day.  In the morning, we did some shots outside, and then we had a green screen for a dream sequence scene.

Our strip club scene was set in an abandoned gas station turned strip club… or strip club turned gas station, I’m not really sure.  Either way, it didn’t look like anything until a few hours before we started shooting.  Brian Garvey and his team turned this abandoned building into a bar, and it looked awesome.

Overall, it was a great experience and I met a lot of awesome people.  Hopefully soon I will be able to post some publicity stills!

The Insignificance of Harvey Recap

I worked on the feature film The Insignificance of Harvey (IMDB) (official site) from the end of March until mid-April, and I have to say – it’s amazing what everyone accomplished in such a short period of time!  For me, it was a great experience and I’m looking forward to some potential gallery work in the near future.

Harvey was written and directed by Jeff Kopas and stars Jordan Prentice (In Bruges, Wierdsville) as Harvey, Kristin Adams (Who is KK Downey?, Where the Truth Lies) as Dakota, and Steven McCarthy (Eating Buccaneers, Dead Mary) as Lucas.

Not to forget our canine star, Inca:

Here she is being a goof with director Jeff Kopas in the background.

Everyone – cast and crew – was a lot of fun to work with.  Here is a brief recap from my 13 days on set.

We spent the first day at a really neat old church in the middle of nowhere that is apparently only open for service once a year.  It was a really great location, despite the fact that it was freezing cold and full of thousands of dead/dormant flies.  This place was dubbed “Where Flies Go To Die”.  It had a very neat cemetery out back.   Of course, I snuck around and took some shots of it – I’ll post them separately.

On the second day, we spent the morning at a vet’s office and then all afternoon and evening at the beautiful Scott Mission Lodge.

Cast member Steven McCarthy brought his dog Ben, so Ben and Inca spent the afternoon sprinting around the forest and tiring each other out.

Production Designer Brian Garvey did a very good job of turning this empty room into an orphanage in just a few hours.

The “Overweight Nun” (complete with fat suit and face full of cotton balls), pictured here with Jeff, was played by Karen Skidmore.  Karen is an amazing theatre actor who stayed in character from the moment she put on her costume to the moment she took it off.

We spent days 3 and 4 at the Toronto Ski Club, which were two very difficult days.  Lots of extras, lots of stunts, and not enough snow or time!

Again, I have to give props to Brian Garvey for building a whole luge track (seen in the last 2 pictures above) in just one morning when there was barely any snow left on the ground.

Days 5-8 were spent mostly inside, which was a nice change!  We were shooting in and around a ski chalet on top of Blue Mountain.

Climbing onto the roof to get a neat shot.

The chalet was actually where the cast and crew were staying.  One of the days was a closed set, which means non-essential crew (i.e. the still photographer) isn’t allowed to be there.

5 Dysfunctional People in a Car

These pictures are from the short Bravo!FACT film 5 Dysfunctional People in a Car, written and directed by the awesome Pat Mills. 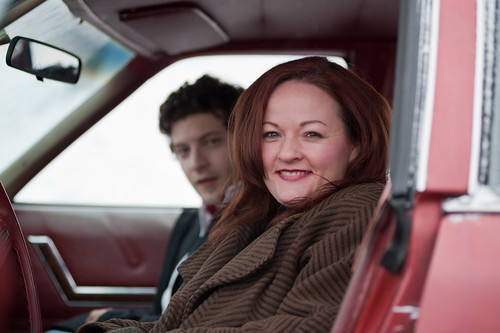 Curtis Lazar as Jake and Chantelle Wilson as Michelle. 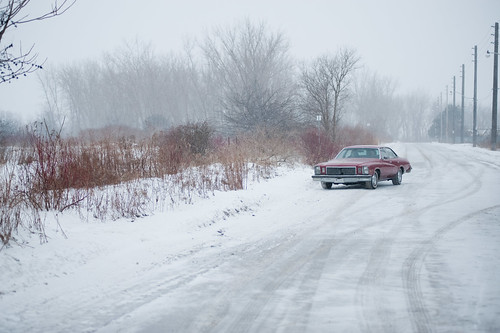 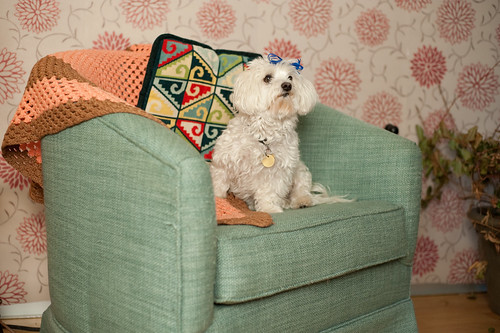 Miko as David the Dog. 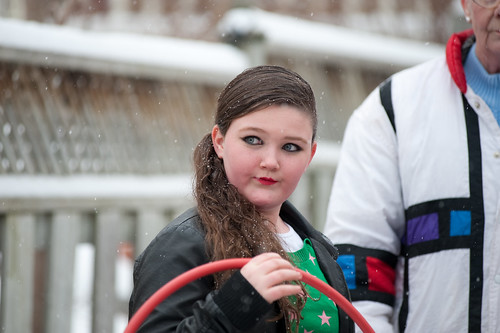 Shannon Ford as Christina and Eileen E. Sword as Deborah. 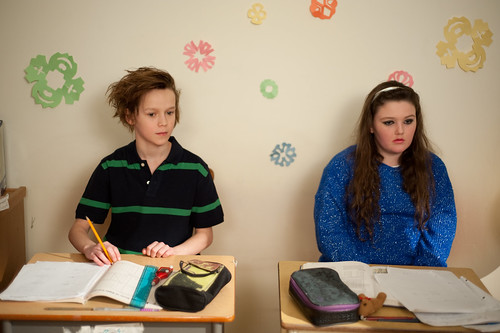 Liam Stockla as Robby and Shannon Ford as Christina. 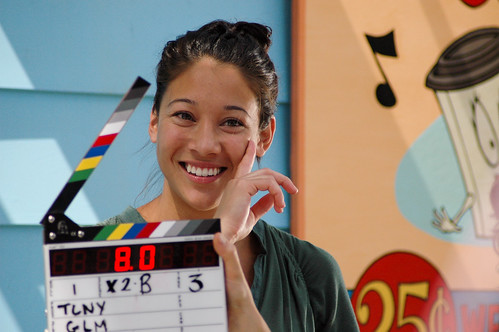