Here are a few pictures from the May 1st protest in downtown Toronto.  You can view the whole set on Flickr. 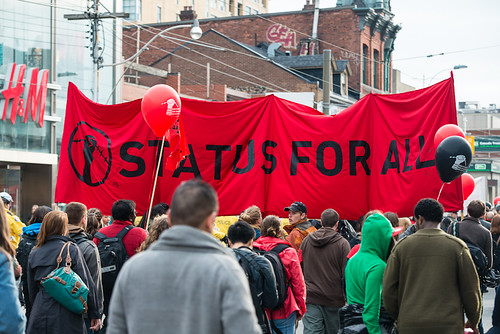 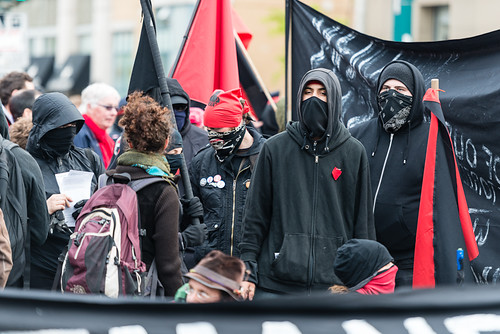 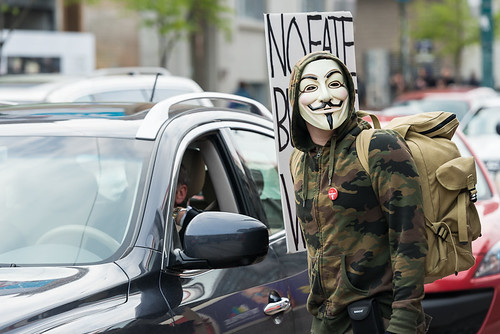 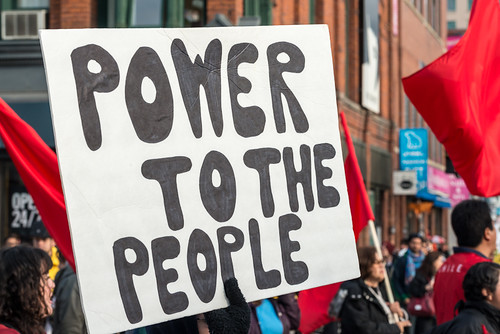 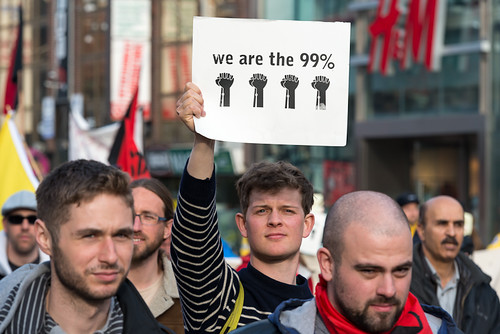 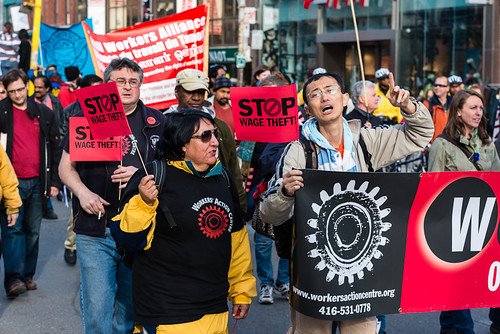 Here are some photos from the 2011 Toronto Zombie Walk.  As usual, you can see the entire set on Flickr. 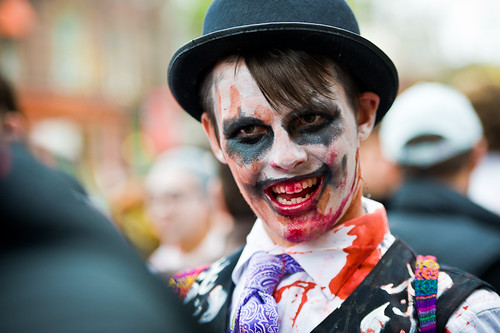 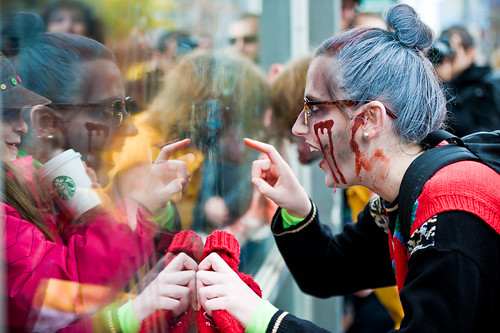 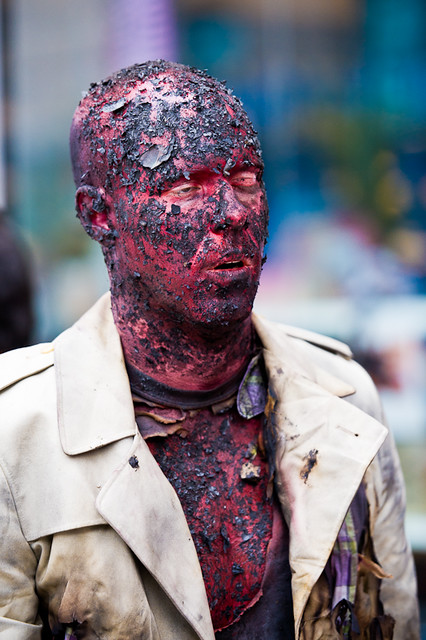 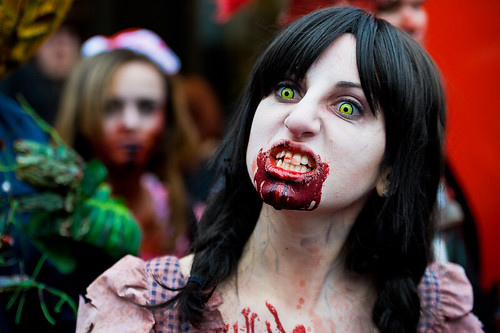 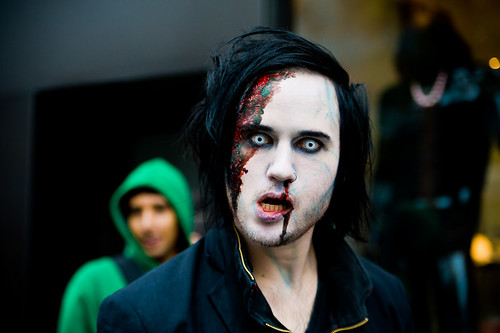 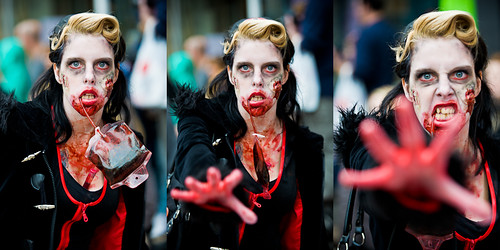 Here are some pictures that I took at Nuit Blanche in Toronto on Saturday night / Sunday morning.  You can view more on Flickr.

Singing golems on Queen Street West.  This was called Angels Singing by Life of a Craphead.

Here are some photos from Jack Layton‘s funeral this afternoon at Roy Thompson Hall in Toronto.

People gathered along University Avenue to watch the funeral procession.  Some were wearing stick-on moustaches. 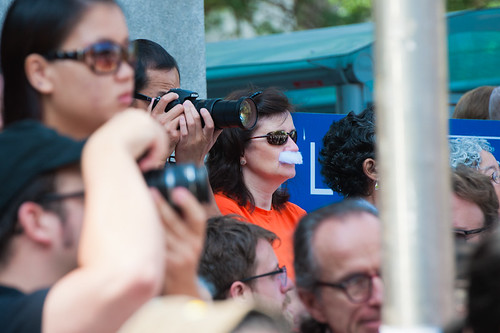 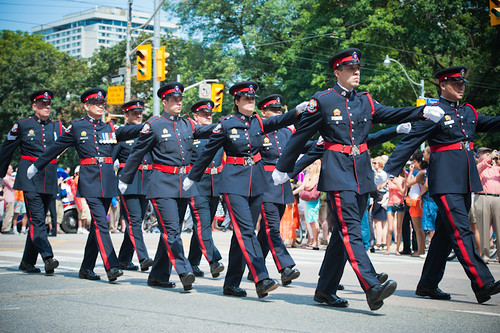 I haven’t read a count of how many people gathered outside of Roy Thompson Hall to watch the funeral, but I’m going to guess it was a lot. 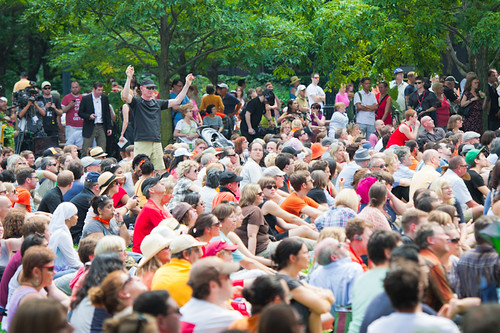 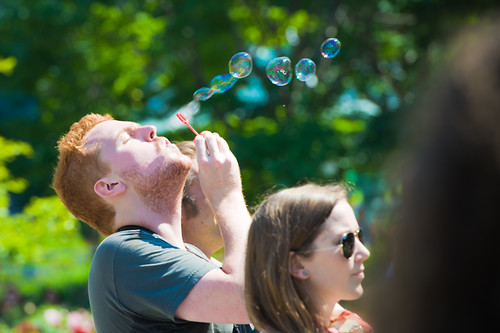 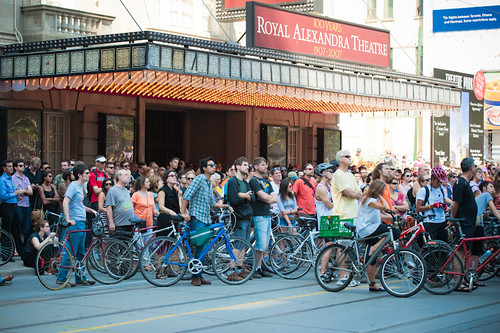 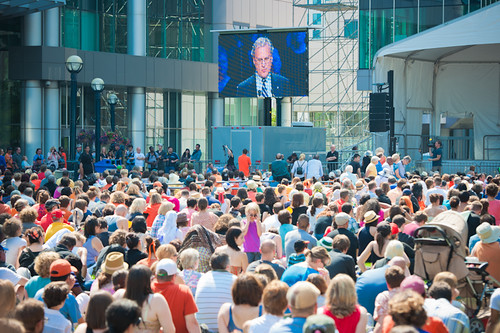 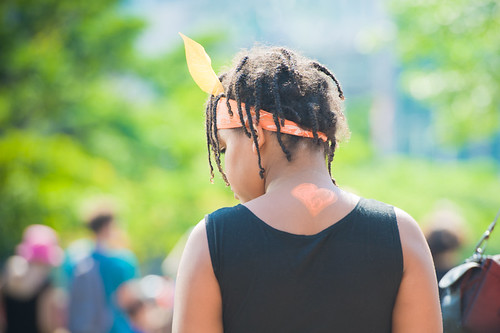 As you probably already know, NDP leader Jack Layton passed away four days ago after his battle with cancer.  This afternoon I headed to Nathan Philips Square and took some pictures of the memorial set up outside City Hall.

It’s quite amazing.  Almost all of Nathan Philips Square is covered in chalk messages to Jack, and today there were hundreds of people lined up for a public viewing inside city hall. 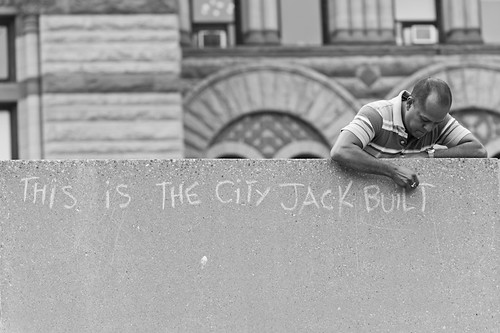 Like I said, almost every part of Nathan Philips Square is covered in chalk: 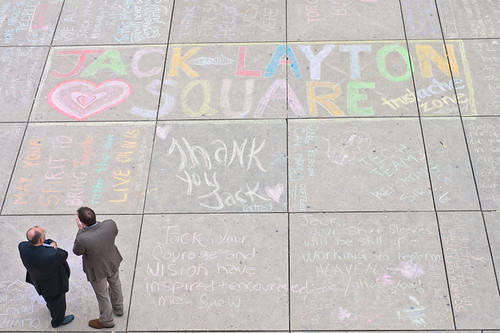 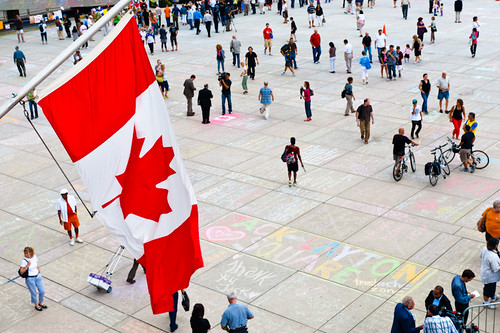 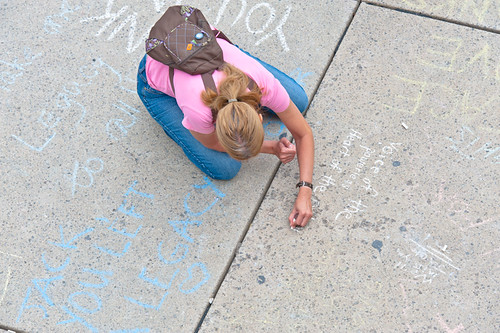 There is also a growing memorial of flowers, notes, gifts, and orange Crush cans: 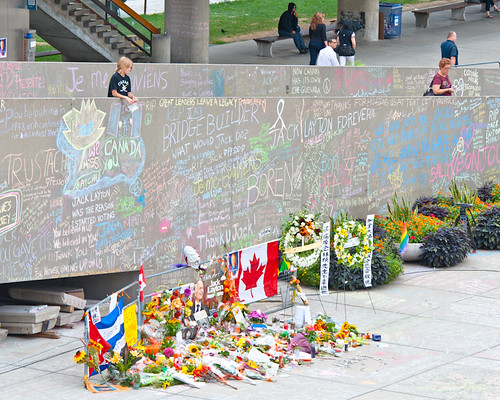 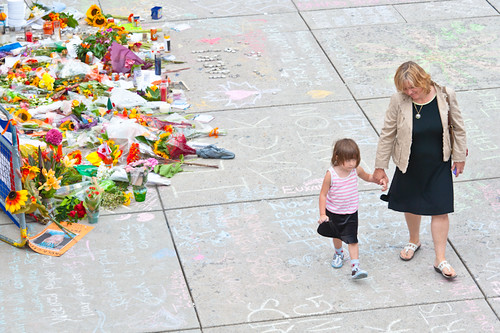 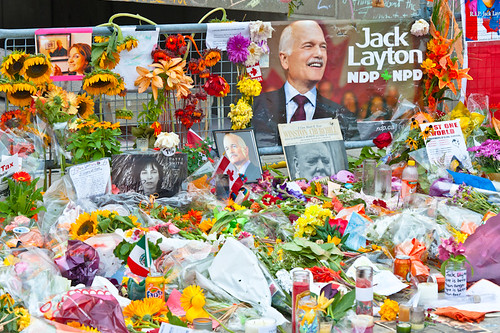 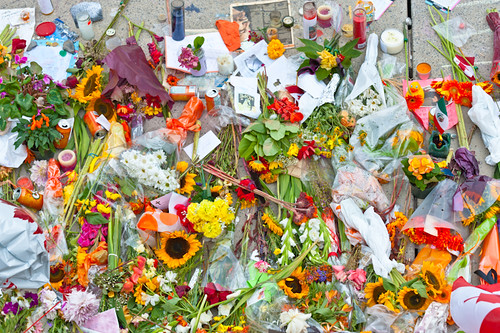 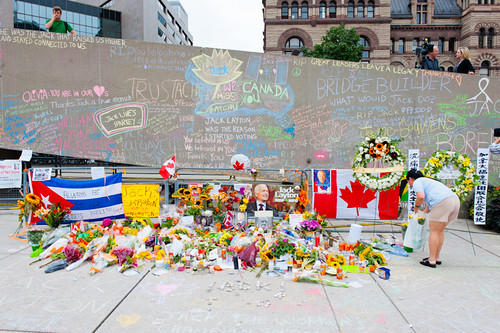 Tomorrow there will be a state funeral held at Roy Thompson Hall.

You can also check out the pictures I took of him last year while filming CBC’s Make the Politician Work.

Since most Canadians have politics on the brain due to today’s election, I thought it would be a good idea to post some film stills I did for the CBC/Gorilla Media television series Make the Politician Work.

The series takes Canadian politicians and puts them in workplaces related directly to their own areas of responsibility and for which they set policies.  I worked on both episodes of this series that were filmed in Ontario.  The first, filmed in 2009, was with Minister of National Defence Peter Mackay at military training camp.  The second episode, filmed in 2010, featured NPD Leader Jack Layton working in the emergency room of St. Joseph’s Healthcare in Hamilton, Ont.

I loved working on this show because of how different it was to normal film shoots.  No takes, no waiting around while lights are being set up and actors are being staged.  It was a really lively, fast-paced set.  Everything happened once, and only once, and you had to capture it or it was  too late.  I shot the images of Jack Layton in the ER through a doorway with dozens of people moving around, trying to find a clear shot of Jack without getting in anyone’s way.  Lots of fun!

Since I’ve been working so hard on adding images to my iStock portfolio, I want to start making weekly updates with my newly available images.

Lately I’ve been focusing mainly on the new editorial collection.  I currently have 76 editorial files for sale on iStockPhoto, out of 658 total portfolio images.  My goal for this year is to add 1000 new images to my portfolio.

And some from a recent trip to the Dominican Republic:

You can view more of my editorial images here!

If you’re a regular visitor to iStockPhoto, then you probably know that iStock is now offering files under an Editorial Only license.  A few people have asked me what that means.  Currently, all files on iStockPhoto must include model releases for any people visible in the image.  There must be no copyrighted materials in the image, such as logos or works of art.   This allows the images to be used for commercial purposes.  For example, this generic photo of a couple in a limo can be used to advertise a dating website:

Since the iStock license allows all commercial images to be used for editorial purposes too, you could use the same photo in an article about things to do on Valentine’s Day.  However, for editorial uses, you don’t need model or property releases because you’re only using the image for illustrative purposes.  So maybe you’d rather have a candid image of a real-life couple holding hands on the street for your Valentine’s Day article.  That’s where the Editorial Only license comes in.

The Editorial Only license allows us to upload images we weren’t able to upload before, because they won’t be used for advertising.  For example, a photo of the copyrighted London Eye to accompany a piece in a travel magazine about things to do in London, or a photo of a crowd on Canada day to accompany an article about Canada Day activities for families.

This is pretty exciting!  I have just over 50 Editorial Images in the collection already, with many more on the way.  Here are a few from my portfolio:

Toronto, Canada – June 26, 2010: Two Toronto city fire fighters walk in front of a burning police car. Taken during the G20 riots in Toronto, Canada on June 26th, 2010. Several police cars were lit on fire in the city’s downtown core in protest of the G20/G8 summits.

Toronto, Canada – June 2, 2009: Close up of a music fan at an outdoor concert at Molson Amphitheatre in Toronto in June 2009.

You can browse more here!

Happy New Year! I wanted to go through my library and post my favourite image from each month this year.  Here goes!

I really like how this strawberry martini shot turned out.  It’s also one of my bestsellers on iStockPhoto.

This was taken at a family portrait session at Allen Gardens.  Dominik was one of the most expressive babies I’ve ever seen, so cute!

This is from a cupcake series I did for iStock.

I did a lot of music and band photography in April, but I really liked this shoot with the band Automatic Toys.

This is when I started doing more headshots for actors.  This is Kaitlyn Riordan, a theatre actress.  I haven’t done any outdoors headshots since this one, now that I have my studio set up.

I did a lot of stuff in June, but the G20 riots were sort of a once-in-a-lifetime photo opportunity.

July and August were big travel months.  I went to a bunch of different places in Ontario, then headed to Scotland.  This picture was taken in St. Andrews.  I have about 50 pictures of doors from this trip, apparently it was a theme.

This picture was taken in Edinburgh, Scotland.

This is my favourite image from September.  It’s also my bestseller on iStock!

It was a tie between this and the Toronto Zombie Walk.  This image is from a big 2-day iStock shoot with 16 other photographers at the Sutton Place Hotel in Toronto.  It was a crazy weekend and I took over 1,000 images.  These girls were my favourite models from the weekend.

I was really happy with how this image from my ballerina series turned out.  It’s also available for order as a print or for licensing on iStock.

This is a personal photo from the holidays.  My uncle was clearing off the lake for skating while my cousin trailed along after him for a ride.  I thought it was cute.

These images are from a series I did with a dancer named Victoria Ellingham.  Makeup and hair was done by Elisa Doyon-Vachon.

All of these images (and more from the series) can be purchased as PRINTS from my PhotoShelter site.   Many are also available for licensing via iStockPhoto.

Someone purchased the left image on canvas at 36″ X 54″.  It’s huge!  I will attempt to get a picture of it on the wall.